What has COP26 achieved for health?:

The COP26 UN climate conference saw over 40,000 delegates gather in Glasgow over the span of two weeks, from 31 October to 13 November  2021. Representatives from 197 countries gathered to agree rules to implement the 2015 Paris Agreement on climate change, as well as an improved support package for vulnerable countries. WHO representatives joined a record number of health leaders at COP26 with the aim of positively influencing an ambitious outcome with their health argument for climate action.

Below are some of the highlights.

Together with the UK Government and other partners, WHO established the COP26 Health Programme, a flagship initiative to bring a stronger health focus and ambition to COP26.

More countries are expected to join the COP26 Health Programme in the coming months, and the UK COP26 Presidency Team, WHO and partners will set up a secretariat to support the implementation of the initiatives. It will provide coordination, help scale up finance, and provide technical support to countries while creating a community of practice. 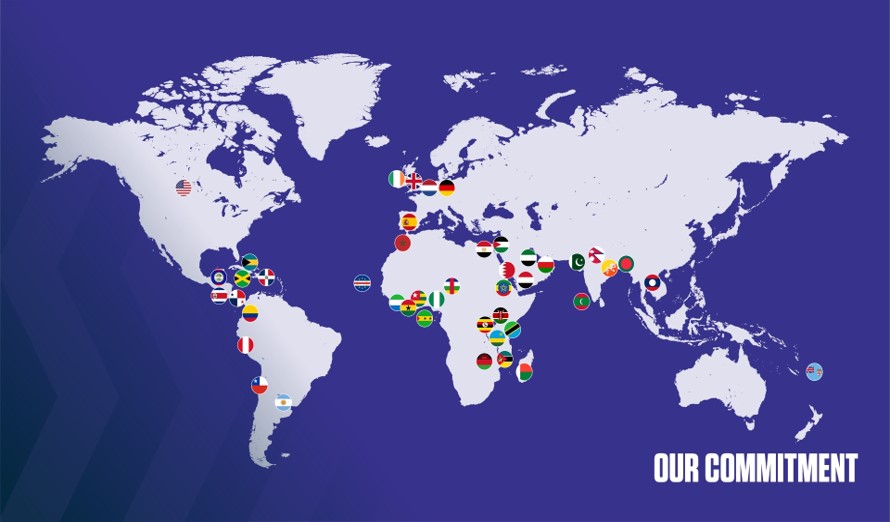 Image: an overview of the initial list of countries that have committed to build climate-resilient and environmentally sustainable health systems and facilities, as part of the COP26 Health Programme. Credit: UK FCDO

The health argument for climate action

In the lead-up to COP26, WHO and the global health community published a special report on climate change and health, entitled ‘The Health Argument for climate action’. The report provides 10 recommendations for governments on how to maximize the health benefits of tackling climate change in a variety of sectors, such as energy, transport, finance and food systems, in order to avoid the worst health impacts of the climate crisis.

The 10 recommendations were developed through extensive consultations with health professionals, organizations and stakeholders globally, and represent a broad consensus statement  on the priority actions governments need to take to tackle the climate crisis, restore biodiversity, and protect health.

The calls for climate action were presented at COP26 to country leaders, representatives of various sectors, and at the UN high-level event on climate action for health on November 9. In the future, they will guide countries towards their healthy and green recovery from the COVID-19 pandemic. 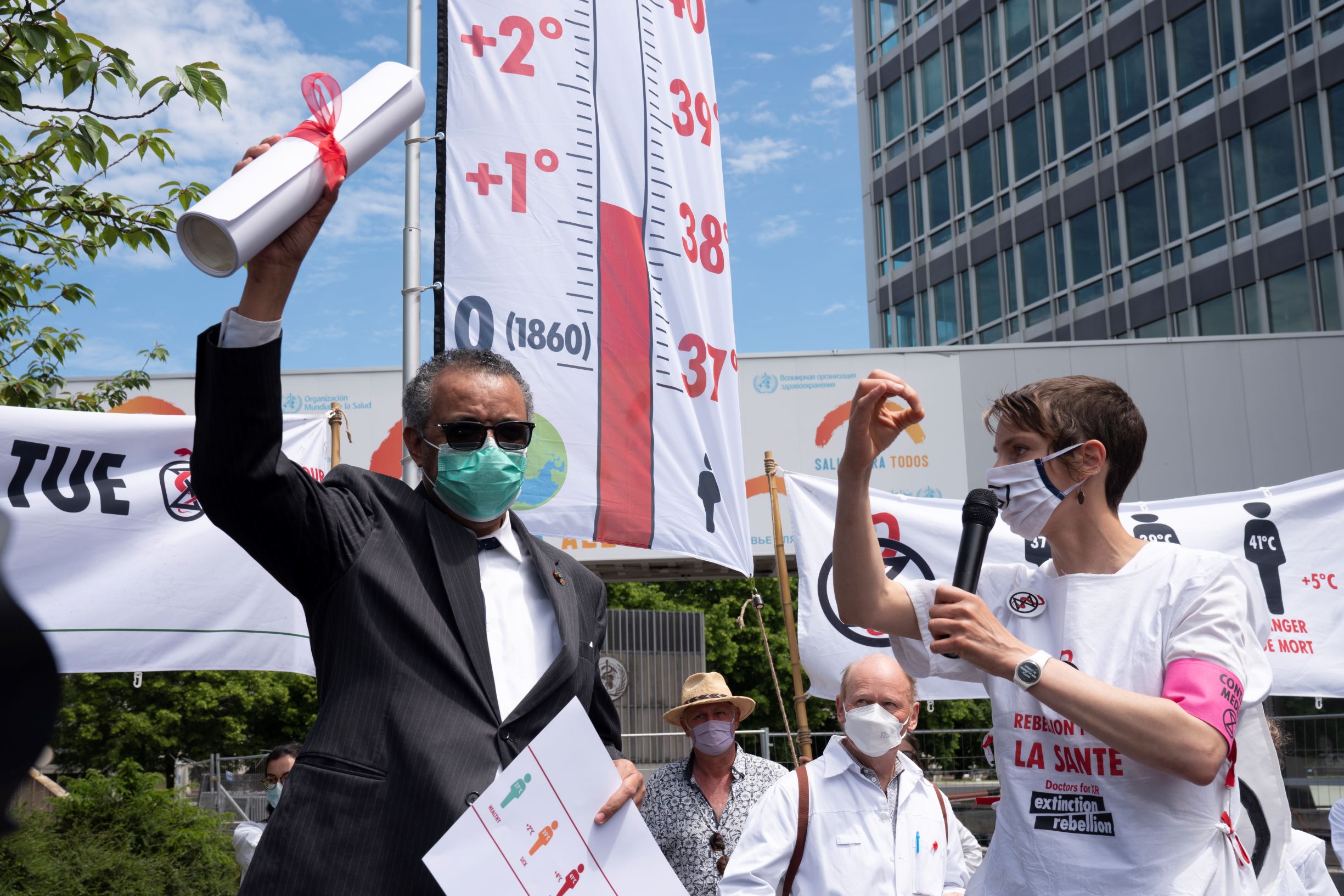 Health professionals speak up on climate

The WHO report was launched at the same time as an open letter, signed by organizations representing more than 46 million health professionals, making up  two-thirds of the global health workforce. The open letter calls for national leaders and COP26 country delegations to urgently step up climate action.

“Wherever we deliver care, in our hospitals, clinics and communities around the world, we are already responding to the health harms caused by climate change,” the letter from health professionals reads. “We call on the leaders of every country and their representatives at COP26 to avert the impending health catastrophe by limiting global warming to 1.5°C, and to make human health and equity central to all climate change mitigation and adaptation actions.”

The open letter was delivered to decision makers at COP26, including country representatives from the United Kingdom (UK), Egypt, and the secretariat of UN Climate Change (UNFCCC). 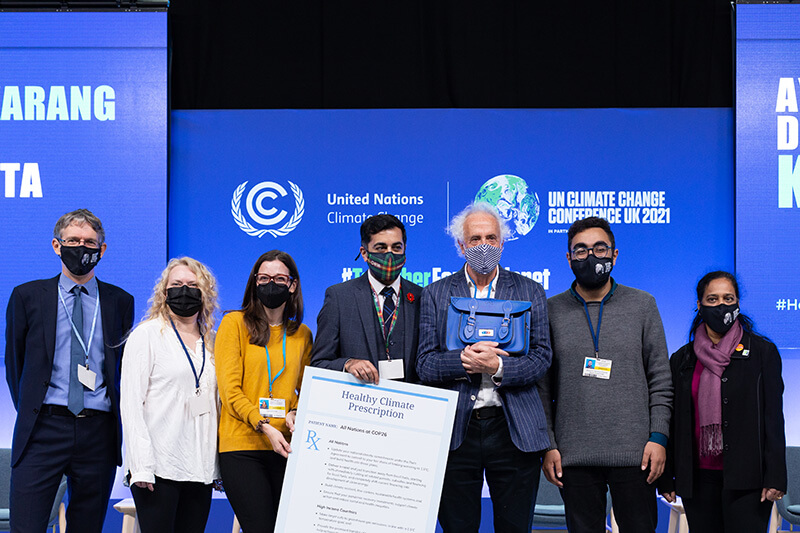 Image: signatories to the healthy prescription letter deliver the letter to the Scottish minister of health and other decision makers at COP26. Credit: Alexandra Egorova.

Travelling greenly and healthily from Geneva to Glasgow

The WHO report and open letter from health professionals were delivered to COP26 in a unique way; they went from the WHO headquarters in Geneva to COP26 in Glasgow by bicycle. WHO’s team lead on climate change, Dr Diarmid Campbell-Lendrum, cycled the first stretch from Geneva to London, after which a group of paediatricians cycled on to Glasgow  to deliver the report and letter in person, under the banner of Ride for Their Lives. The initiative attracted a lot of attention  and helped to raise awareness of the dangers of air pollution, and of the health and climate change benefits of more active modes of transport, such as cycling. 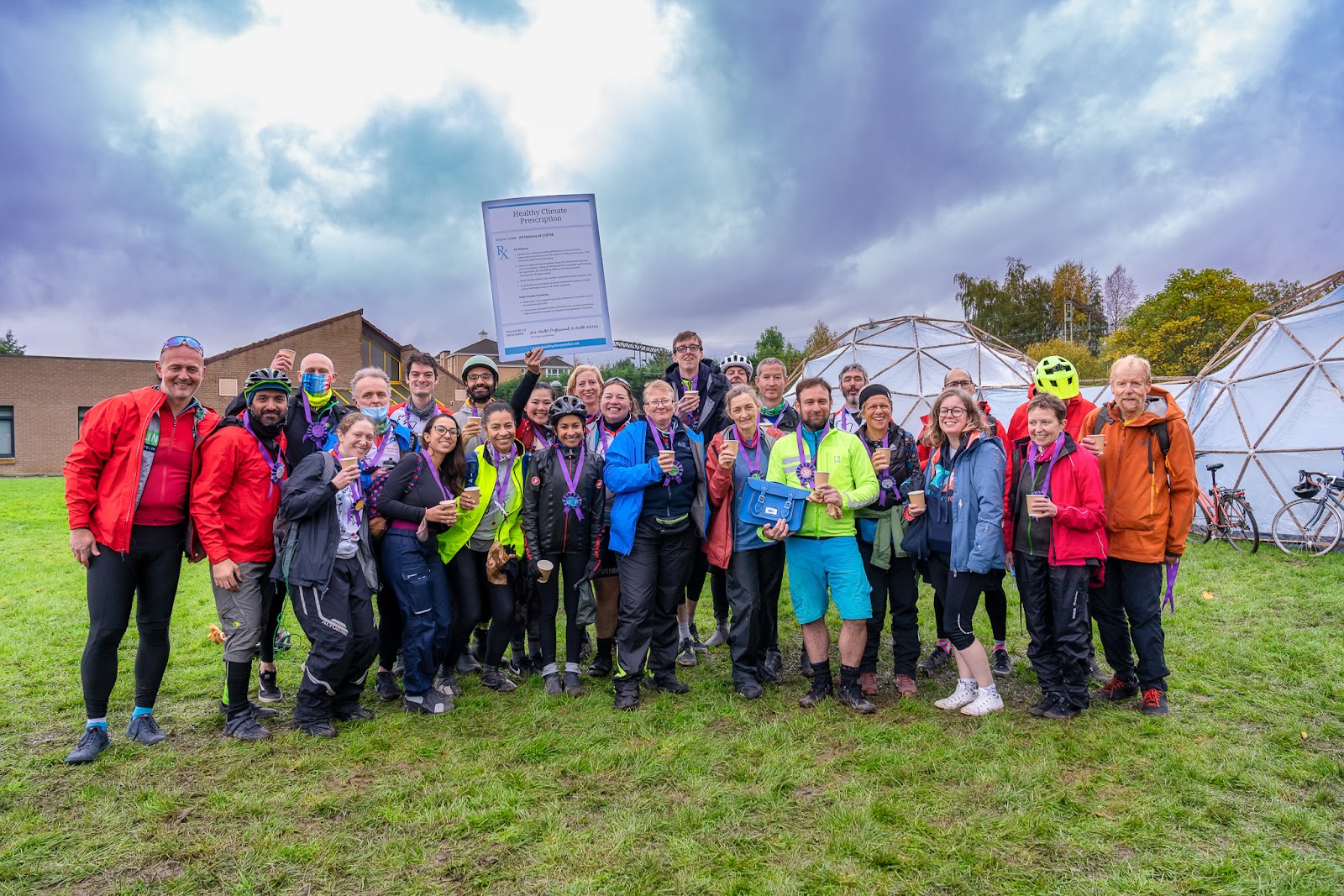 Image: Cyclists from “Ride for their Lives” delivered both a letter from 46 million health workers, and the WHO COP26 Special Report on Climate Change and Health to Glasgow. Credit: Climate Acceptance Studios

The health pavilion at COP26

For the first time, the health community had its own pavilion at a UN climate conference. Over 60 events were organized in the span of two weeks, showcasing the health arguments for ambitious climate action across many different sectors and topics. The pavilion provided a space for the health community to gather at COP26, and helped mainstream health considerations in action areas beyond the health sector. Recordings of all COP26 health events can be found on the WHO website.

At one of the side events, WHO and the Research Subcommittee of the WHO-Civil Society Working Group to Advance Action on Climate and Health launched its report “Climate change and health research: current trends, gaps and perspectives for the future”, constituting a review of research on climate and health implemented over the past decade. 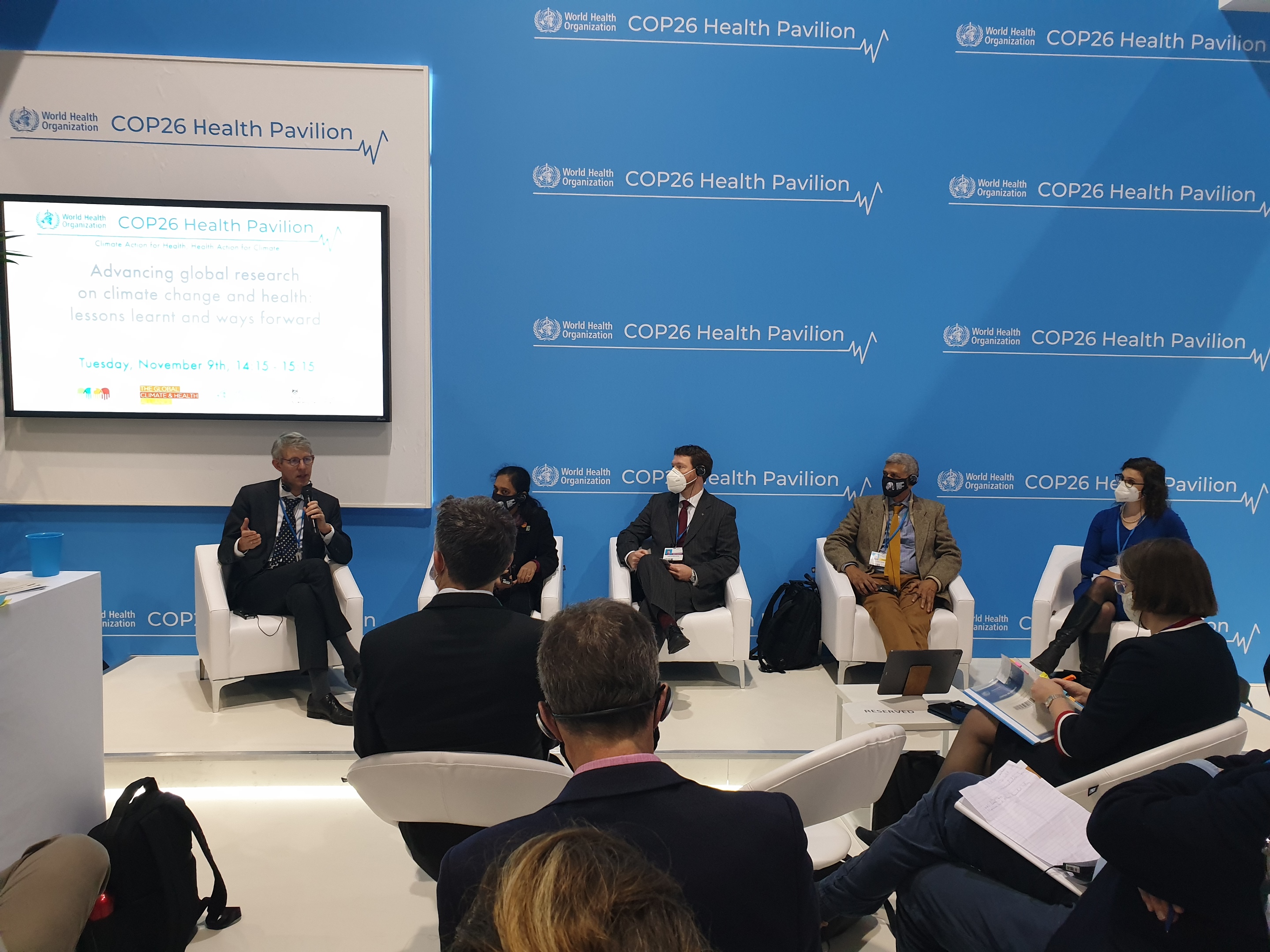 Image: one of the more than 60 side events that took place in the COP26 Health pavilion in the first 2 weeks of November 2021.  Credit: Alexandra Egorova

Health and climate change a priority for many countries

Countries have begun to prioritize health in their efforts to protect people from the impact of climate change, but implementation has been limited thus far. The results of a new WHO survey, which were launched at COP26, show that countries face major barriers to progress on climate and health, including a lack of funding; the impact of COVID-19; and insufficient human resource capacity.

About half of the countries report that the COVID-19 emergency has slowed progress on addressing climate change by diverting health personnel and resources, and continues to threaten national health authorities’ abilities to plan and prepare for climate-related health stresses and shocks.

Health for climate action in Glasgow

The global conference on climate change and health was organized by WHO, GCHA and partners on Saturday 6 November  at the Glasgow Caledonian University. It brought together health leaders and representatives of various sectors to call on governments, businesses, institutions and financial actors to drive a green, healthy and just recovery from COVID-19. Speakers include Ms Mary Robinson, Former President of Ireland and Chair of The Elders; Ms Julia Gillard, former Prime Minister of Australia and Chair of Wellcome Trust; Susan Aitken, Leader of Glasgow City Council; Rosamund Adoo-Kissi-Debrah, mother to the first child to have air pollution officially recognized as the cause of death; Nick Watts, Chief Sustainability Officer of the UK NHS; representatives from WHO; ministers of health from vulnerable countries, and many others. 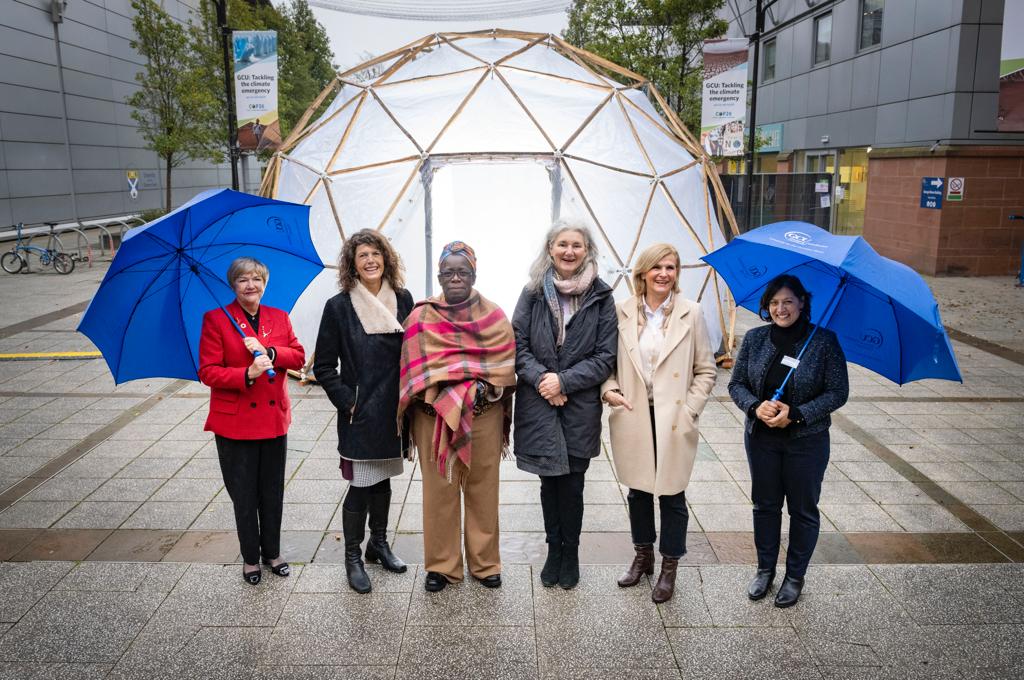 Image: The organisers and key-note speakers of the 2021 global conference on climate change and health at the Glasgow Caledonian University, standing in front of the art installation ‘the pollution pod’. Credit: Arthur Wyns

On Saturday November 13, and after weeks of negotiations, countries adopted the Glasgow Climate Pact, a set of rules to operationalize the Paris Agreement as well as several pledges and processes to provide more support to vulnerable countries.

So, whilst the outcome of COP26 is less ambitious than hoped or expected, the global health workforce feels heard and is mobilized to build a more sustainable and climate resilient future.

“WHO and the health community remain committed to climate action and to keep working to protect our health and planet from the climate crisis,” said Dr Tedros Adhanom Ghebreyesus, Director-General of WHO about the outcome at COP26. 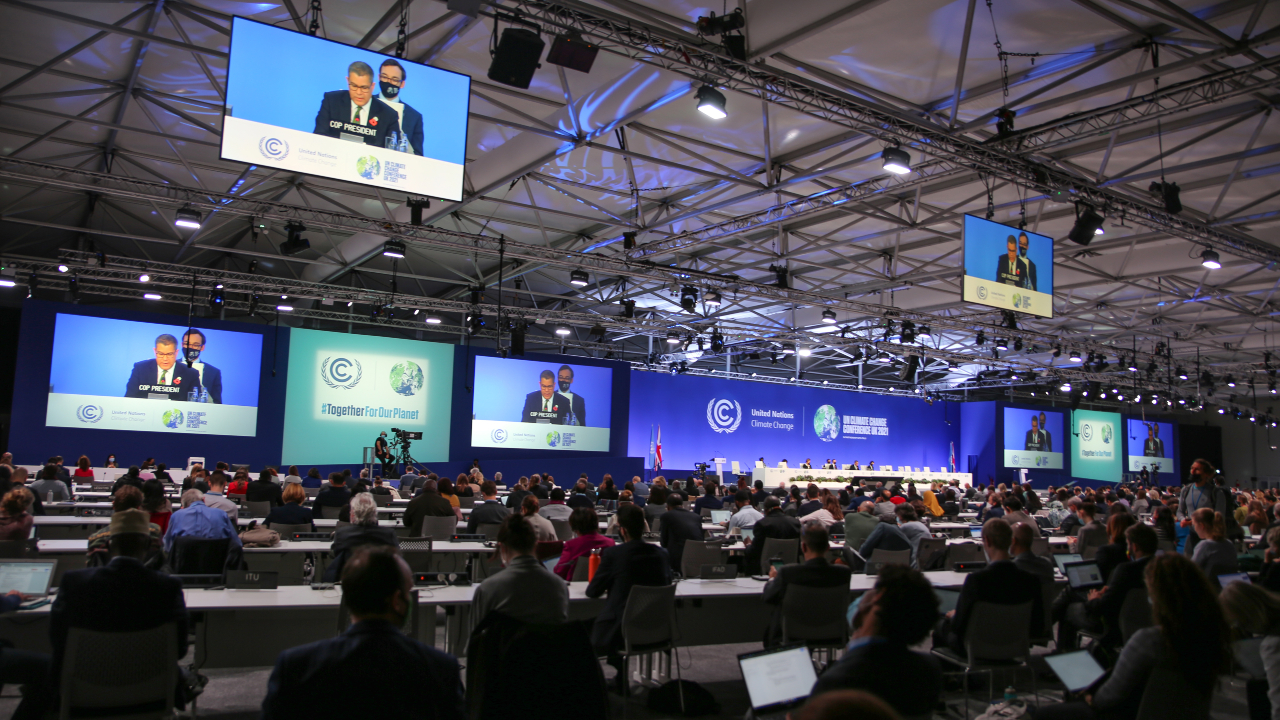 Image: the Glasgow Climate Pact and the Paris Agreement rulebook were adopted at COP26 on November 13. Credit: IISD/Kiara Worth

The Glasgow Climate Pact leaves climate action at a critical  point.  It provides entry points on critical issues such as financing, the fate of coal and fossil fuel subsidies  – but leaves them either unresolved or with caveats.  The health community therefore needs to act with the same clarity of purpose and coordination as when a patient arrives critically ill, but with signs of life.

The immediate next steps are to work with partners to provide technical and financial support to the many countries that have signed new commitments to increase the resilience of the health sector, and to reduce carbon emissions from healthcare.  WHO will work with government and NGO partners such as the UKNHS , Healthcare Without Harm and the Aga Khan Foundation to provide technical support, and with national governments, and bilateral and multilateral development partners to remove barriers to access the necessary finance.

In the longer term, however, the success or failure of COP26 ultimately depends on whether people around the world continue to mobilize to support the most ambitious climate action possible.

The most important role of health professionals is therefore to continue to provide the evidence, examples and their trusted voice to argue for climate action to protect the health and wellbeing of the people they serve, rather than delay and distraction to protect vested interests.  We will be back before, during and after COP27, to continue to speak up for the right to a healthy and sustainable environment.